Feast of the Holy Nativity of Our Lord 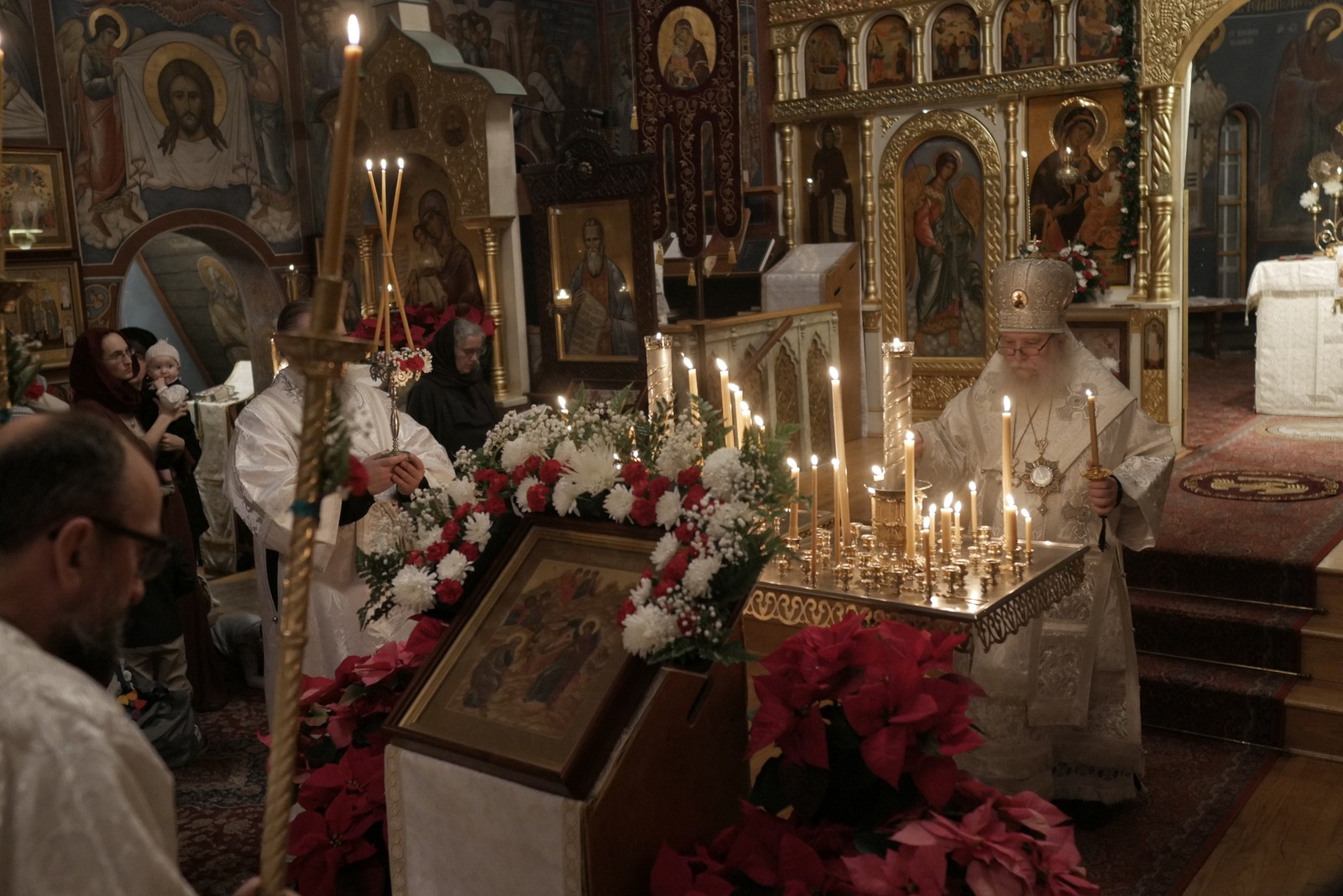 The monastery is now enjoying and celebrating the feast of our Lord’s Holy Nativity.  The Lord even provided us with seasonable snowy weather.  The brethren have decorated the monastery and seminary with lights and Christmas trees.  The church has been filled with poinsettias.  The choir has had practices to improve the chanting of the many special hymns and melodies.

On the Eve of the feast, the Royal Hours were served in the morning, followed by the Vesperal Divine Liturgy of St. Basil.  His Grace, Bishop Luke, presided at the service, concelebrated by the monastery clergy.  At the end of the service, as is traditional, the icon of the Nativity was brought out to the center of the church, preceded by a candle, which signifies that the Light has come into the world.  The choir, joined by the faithful, then sang the troparion and kontakion of the feast for the first time, thus glorifying the feast.

As is the pious custom, there was no meal served until 5PM in the evening.  Meanwhile most of the brethren rested, except for those who occupied themselves with the decorating of the church.  Also, those who were assigned, prepared a delicious fasting meal of the traditional kutiya (boiled wheat), stewed dried fruit, mushrooms, and so on.  At this time, gifts were handed out to the brethren and staff, in commemoration of the Magi’s gifts to the Infant Jesus.

The All-Night Vigil commenced at 7PM with Great Compline, followed by Litya and then Matins.  Despite the somewhat inclement weather, many faithful attended this and other services.  On Christmas Day itself, the church was full of pilgrims and our local faithful.  Vladyka Luke presided at the Divine Liturgy, concelebrated by all of the clergy attached to the monastery.  The singing was glorious, and we all gave thanks for being able to have such grace-filled services.   A great number of people availed themselves of the mysteries of Confession and Holy Communion.

Following the liturgy, the traditional monastery meal of aspic of fish with all the usual trimmings was served.  This was followed by Vladyka’s  reception in his quarters.  Gifts were handed out to eager children, and refreshments were offered to those who came to congratulate Vladyka with the feast.  Some traditional carols were also sung.

The monastery follows the tradition of having festive services for three days, for Nativity, Pascha as well as Pentecost.  Thus, on Christmas evening, Great Vespers and Matins were served, commemorating the Synaxis of the Holy Theotokos, and then again, Vladyka served Divine Liturgy on Saturday.  Since the third day of Nativity is also a Sunday this year, that day, when the Church commemorates the Martyr Archdeacon Stephen, is combined with the Sunday after Nativity, when also are commemorated the “Fathers of God,” Saints Apostle James, the Righteous Joseph the Betrothed and the Holy King and Prophet David.

The afterfeast continues until December 31/ January 13, when we prepare to celebrate the memory of St. Basil, the Circumcision of the Lord, and the New Year according to the Church calendar.

Eve of the Nativity

view slideshow >
Feast of the Nativity